High Desert Homesteading > The Unexpected > The Lights Go Out - AGAIN!

The Lights Go Out - AGAIN! 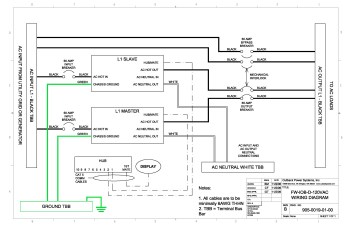 It was only a few months ago when we had to replace all the batteries in the off-grid solar power system.

The entire system was less than 5 years old so we thought we should be in good shape - until the lights went out - AGAIN!

Well, half the lights to be more specific. Actually half the breakers tripped to get technical.

Without getting too technical, the most critical components of the system are the power inverters / batteries chargers. They charge the batteries from the solar panels or generator and also convert the 48 volt DC from the batteries into 120 volt AC.

In our case, there are two inverters (a Master and a Slave) that each put out two legs of 120 volts at 3500 watts per leg.  If fully engaged, we have a total of 14,000 watts of available power. Much more than some wiring and transformers and such, these high-tech inverters are actually computers with multiple mother/circuit boards.

Like any computer, they can crash. We are talking about full mother board failure. In this case the Slave unit crashed. In the instant it took for the Master unit to take full control, it tripped all the breakers on one leg of the house breaker box.

I consulted with the manufacturer and the local (a relative term out here) solar tech. He and I had worked together on replacing all the batteries and he knew I have some experience with computers (building, repairing, using, despising). He said I could buy the replacement boards from the manufacturer and probably replace them myself. So, an $800 charge to my credit card later, they were on there way. 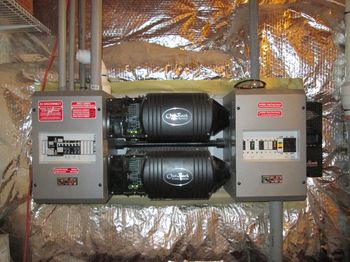 It was a long week waiting for the new parts. We only had half power available and had to make sure not too many things were on at once or the remaining inverter would overload and shut down. We used the old oil lamps a lot.

The parts arrived. The inverter had to be pulled off the wall (surprisingly heavy). A couple hours later the new parts were in, the unit remounted and wired into the system.

IT DID NOT WORK! Every time I tried to restart the system, the rebuilt inverter would go into an error mode. I double checked everything when I replaced the boards - how could this be?

By that time it was getting too late to call tech support - another night with little sleep (I must have rebuilt the thing 100 times in my mind trying to figure out where I went wrong).

As it turned out, the system had to be reprogrammed to get the Master and Slave inverters to work and play well together. An hour on the phone with tech support was all that was needed.  Working fine every since!